Hydrogen is increasingly used as an alternative fuel source for large trucks. One example of this is at this year’s Dakar Rally, where the KH-7 Epsilon Team’s MAN TGA 26.480 truck will run partly on hydrogen. The large truck will be driven by Jordi Juvanteny while Jordi Ballbé will act as co-pilot and José Luís Criado as technician.

This is the first time hydrogen has been employed in long-distance off-road racing that takes place over several days. Previously the only use of hydrogen at a rally event was when it was employed by GAUSSIN with their H2 Racing Truck at the 2022 Rally – but this was intended only for experimenting and did not compete for classification.

Jordi Juvanteny addressed the media after the event: ‘The planet asks us for changes and we should not wait for an institutional reaction…We have to do it together and start now. We are an amateur team with the desire to do different, innovative things and thus contribute a small grain of sand on the planet which asks us to’.

Juvanteny’s hydrogen truck weighs in at an impressive 11,500 kilograms, and its hydrogen power is supplied by Spanish energy company EVARM.  Being a mix of hydrogen and diesel, the fuel is injected from a pair of 420-litre tanks that are refilled via generator between stages. The current blend is balanced at 50/50 between hydrogen and diesel, but there are plans to increase this to 90% hydrogen for next year. The Rally is even planning on introducing an entirely separate category for renewable energy vehicles that year.

Innovations like these depend on developing the next generation of renewable energy leaders. Education that integrates critical thinking, creativity and teamwork with traditional STEM subjects – so called STEAM education – is essential to train these future leaders.

Hydrogen has zero environmental footprint at the point of use, and can be created simply from water and solar energy. This makes it an appealing choice for race teams experimenting with green types of fuel. An example of this is Extreme E’s Spark ODYSSEY 21 cars which have an entire hydrogen fuel cell generator.

‘We believe that our experience can contribute to innovation in a sector such as highly sensitive freight transport for sustainability and that it cannot benefit from other energies such as electricity’, Criado commented. ‘After so many Dakars there are still challenges. Every year is a new motivation, every year the race is different, the route is always secret and you do not know until the day fifteen minutes before the start so that nobody can cheat. Therefore the challenge is to finish the race, which not everyone does…. This race is our life’. 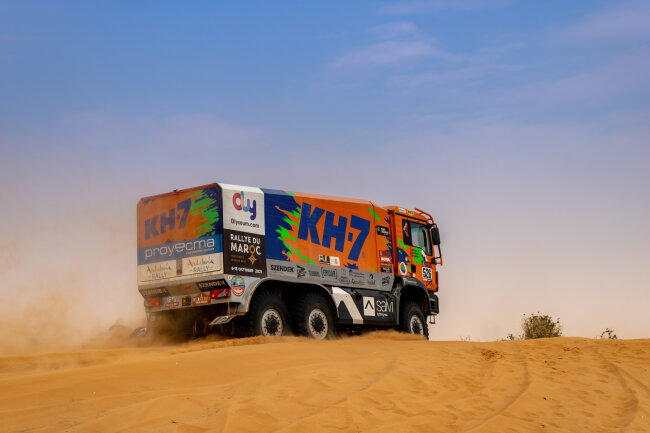