From Toy to Transport Solution: Lessons from the H-racer

There are a few products in the Horizon catalogue which act as milestones. H-Racer is one such product.

The concept was simple enough: a hydrogen hybrid RC car that came with its own hydrogen refueling station. Add in the fact that users construct the car themselves and you have a powerful didactic tool. It didn’t take long for the H-Racer to become the world’s best-selling hydrogen car– albeit also one of the world’s smallest.

Then came the design awards – Time Magazine, BusinessWeek – and we realized we were on to something special. There is a market for well-made hydrogen hybrid vehicles, a big one. What could this mean for real-scale transport solutions?

Firstly, H-racer sells so well because it comes with its own hydrogen. From the users’ perspective all they need is some distilled/de-ionized water and they’re good to go. That makes H-racer a high-value purchase, as well as making storage nice and simple.

Secondly, while H-racer grabs the headline, for over a decade Horizon has been working on large fuel cell system deployment. The H-racer emphasizes the need to build step by step, keep thing small, simple and efficient. The less hydrogen required, the more the technology is in our control. For this reason, Horizon keeps its fuel cell development to below 5kW for inner-city transport and on-demand hydrogen storage systems.

The thinking behind H-racer is the same thinking that produced our Hydrofill series, desktop hydrogen production that simply needs water and a power supply to charge up Hydrostik and Hydrostik Pro metal hydride cartridges. Horizon believes that the future of energy is in localized, domestic production— homeowners choosing the solutions that best match their needs.

So yes, H-racer is a great RC car and awesome fun to build and drive. But it’s also an important precursor of a time soon to come when each one of us will control our own energy destinies. 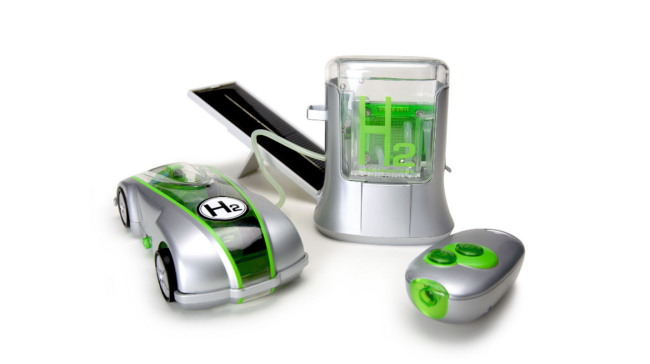