The 2022 FCEV winning streak using Horizon Educational’s XP hydrogen fuel cell stacks continued from July 19th to the 24th at this year’s 17th Efficiency Challenge Electric Vehicle Races!  The event was held at the Körfez Racetrack in Kocaeli, Turkey as part of the TEKNOFEST, which is a major event platform that encourages and supports participants to advance high-end technologies like hydrogen fuel cells and UAVs by way of exciting competitions.

As its name implies, the race is won through efficiency instead of completing the most laps in a certain amount of time.  Winners of the Efficiency Challenge Electric Vehicle Race are determined by each team completing a minimum number of laps in a specified amount of time.  However, it is not enough to simply complete the laps in the allotted time, since the amount of energy used to complete them is also a determining factor in whether a team is able to finish in the top three places.  Only the teams that build hydrogen sipping FCEVs instead of hydrogen guzzling FCEVs have a chance of winning.

Eight teams signed up for the “hydromobile category” in this year’s race, but four of them were unable to make it onto the track due to issues uncovered during the safety and technical checks of each team’s vehicle.  However, the four teams that made it onto the track and successfully competed in the race all used Horizon Educational’s XP fuel cell stacks!  Below are the teams that competed in the race: 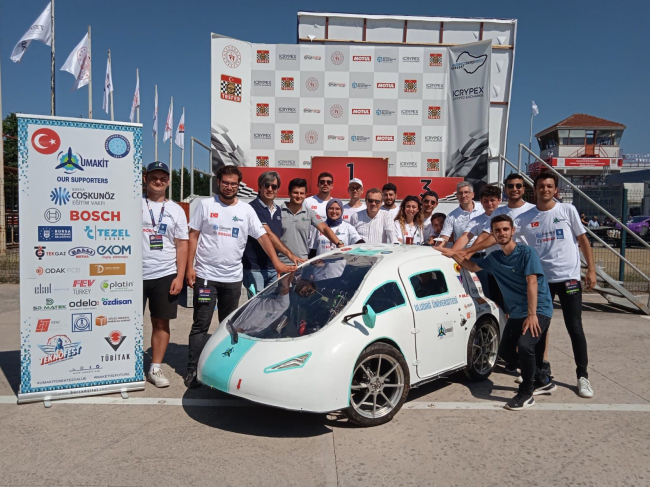 Team Umakit ended up finishing in first place during the race, which is the second time this summer that a XP fuel cell stack has been used in a collegiate mobility competition to set a world-record or achieve a first-place victory!  In fact, XP fuel cell stacks have helped teams across the world successfully participate in mobility challenges for over ten years now.

Horizon Educational congratulations Umakit on its July victory, and we are looking forward to the 18th Efficiency Challenge Electric Vehicle Races in 2023!  We also thank TENMAK for sponsoring the hydromobile division in the race and choosing Horizon Educational to provide the fuel cell stacks.

Speaking of upcoming races, the 2022-2023 H2GP season starts on September 1st!  The season is already shaping up to be the best one so far.  For those high schools around the world that have not already signed up for the new season, you can click here to find out how to compete in the H2GP initiative.

At this year’s 17th Efficiency Challenge Electric Vehicle Races, which were part of TEKNOFEST, Horizon Educational’s XP hydrogen fuel cell stacks were chosen in the “hydromobile category” as the best product with which to build race winning FCEVs, and four teams used the XP 1000 fuel cell stack to participate in the race.

The teams using the stack were as follows:

Team Umakit ended up being the winner of the race