You will need a source of hydrogen like the Hydrofill Pro to charge the supplied Hydrostik Pro cartridge with hydrogen. 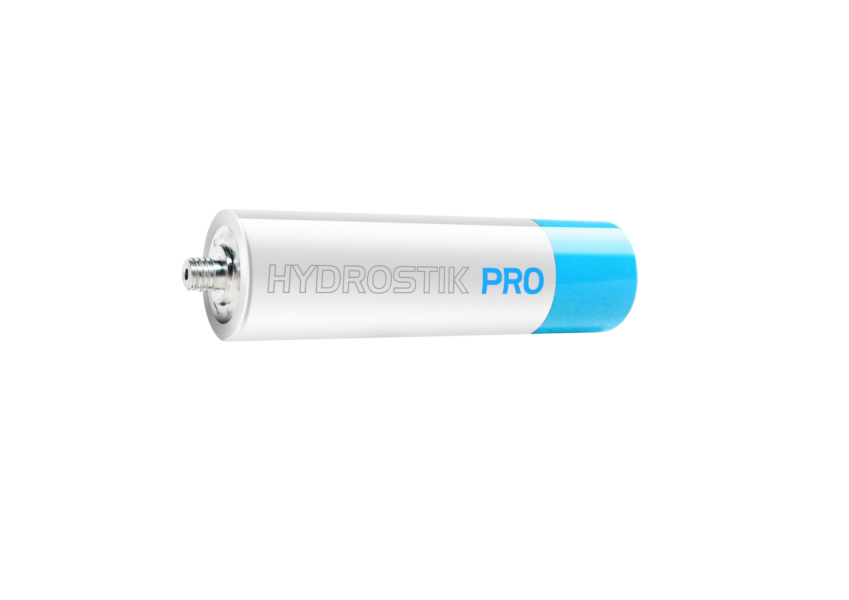 HYDROSTIK PRO Cartridge is designed with an aluminum alloy materials enclosure and a AB2 alloy for hydrogen absorption.
After activation, the AB2 alloy is capable of absorbing hydrogen, expanding and releasing heat until saturation. The internal pressure of the fully charged cartridge remains at 30Bar (435PSI) at ambient temperatures of 20˚C - 25˚C and the weight is around 0.9 gram higher. Once the cartridge valve is opened and pressure is reduced, hydrogen will be continuously released from the alloy that will absorb heat. If the heat absorption rate decreases, so will the hydrogen release rate. The cartridge enclosure materials are made of an aluminum alloy that has excellent heat conductivity properties that can facilitate heat  conduction of the alloy during gas absorption and release processes. Gas absorption  efﬁciency of the alloy can be signiﬁcantly impacted by oxidization due to humidity; therefore dry hydrogen gas with a purity of no less than 99.99% is required for charging use. 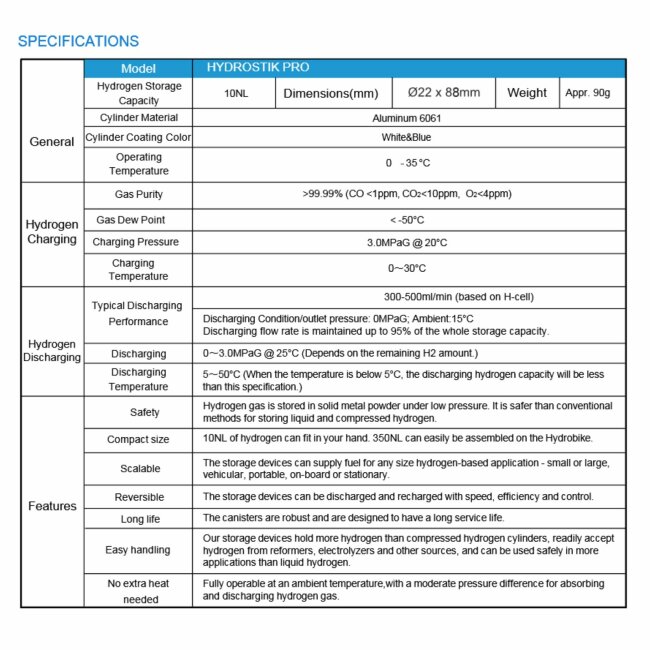 How many hours of electricity are provided by a HYDROSTIK PRO Metal Hydride Cartridge?

The HYDROSTIK PRO Metal Hydride Cartridges contain up to 11Wh of electricity. So if drawing 1W from the fuel cell, it will run for 11hours.

How can I monitor how much gas is left in a cylinder?

This can be measured by weight, measuring the empty weight gives you the benchmark level and then you can work out the total amount of hydrogen by understanding that 11Liters of Hydrogen =1gram so make sure your scales can work in 1/10th of 1/100th of a gram to get accurate readings. Pressure cannot be used as a measurement of the amount of Hydrogen in the canister as the pressure is almost the same between 10%-90% full.

No, if the casing is damaged the HYDROSTIK PRO is not safe to use or handle and should be recycled at the proper locations.

Can I store HYDROSTIKs in cars parked in full sun?

Where do I recycle a spent or damaged HYDROSTIK PRO?

Typically, HYDROSTIKs can be recycled where rechargeable batteries are recycled.

The HYDROSTIK PRO metal hydride cartridges do not contain any dangerous substances for the environment, we would recommend that they still be disposed of in a similar way you would dispose of a standard battery.

The H2Hybrid Fuel Cell Automotive Trainer is the ultimate tool for exploring science and engineering concepts through hands-on activities with a working fuel cell car.  An…