The Super Capacitor Science Kit introduces students to the extraordinary storage and power potential of the super capacitor. Create energy from the hand crank and monitor energy storage with a charge level indicator. Then demonstrate the energy density and power of the super capacitor by running a small fan module. With super capacitors an integral part of the automotive revolution currently changing the way we think about transport, this is the ideal kit to explore the principles of high density energy storage. 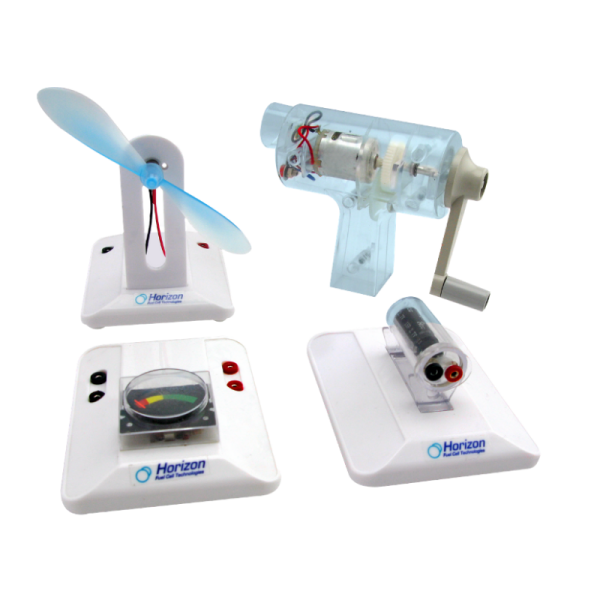 Conduct dozens of exciting, hands-on experiments with the science kit

Ideal as a battery replacement for a wide variety of basic electricity experiments, the hand crank generator is a low voltage power source that lets you create electrical current by simply turning a crank. This ingenious device generates student interest producing electrical energy through hands-on student effort. Student's enthusiasm is immediate, whether they are third graders lighting a bulb or college students reviewing sophisticated principles such as Ohm's Law or the electromagnetic properties of light. Made from a sturdy, see-through ABS resin with nylon-plastic gears and handle, the kit is designed to shrug off use and abuse. It produces approximately 200mA of usable current. It is capable of producing up to 6 volts. You can reverse polarity by simply cranking the handle in the opposite direction. And, when powered by another kit or low voltage power source, it acts as a motor.

Some of the activities require accessories sold separately. You can study electron flow, parallel and series circuits, Ohm's Law, motors and generators, energy transformations, and more.

Repeat the above experiment exactly, but rotate the generator counterclockwise. What is the result?

Electricity in circuits can produce light, heat, sound, and magnetic effects. Electrical circuits require a complete loop through which current can pass.

Students know the role of electromagnets in the construction of electric motors, electric generators, and simple devices, such as doorbells and earphones.

Students know how to design and build simple series and parallel circuits by using components such as wires, batteries, and bulbs.

Energy is a property of many substances and is associated with heat, light, electricity, mechanical motion, sound, nuclei, and the nature of a chemical. Energy is transferred in many ways. The total

energy of the universe is constant. Energy can be transferred by collisions in chemical and nuclear reactions, by light waves and other radiations, and in many other ways. however, it can never be destroyed. As these transfers occur, the matter involved becomes steadily less ordered.

Analyze the relationship between an electric current and the strength of its magnetic field using simple electromagnets. Investigate and compare series and parallel circuits.