Why Hydrogen-powered Trains May Soon Be Everywhere

The train has been around in some form for over 200 years. The first steam engine was invented in Great Britain in 1804, and for the next 150 years this was the standard of rail transport.  Next came diesel-powered trains which began to replace the steam engine in the middle of the 20th century. By the 1970s, diesel locomotives were almost everywhere in the western world, being far less complex, more reliable, cheaper, cleaner, and easier to maintain than their predecessors. Towards the end of the 20th century electricity took over. Electric-powered trains were quieter, accelerated more quickly, and the train itself didn’t produce any direct emissions, leaving train stations with cleaner air and less passengers having the hold their breath at the stench of diesel fumes.

If the electricity is generated using renewable energy technology, electric-powered trains do have the potential to decarbonize rail transport and help the us achieve our international CO2-emissions targets, saving the planet. But there is a catch.

The cost of electrifying all railway tracks is incredibly expensive, and doesn't make sense for tracks which are not used heavily or go to small towns and villages. Only 55% of tracks in France are electrified, and in Great Britain this is only 38%. How can we power trains using renewable energy which don’t run on heavily-used, electrified railway tracks?

The answer is hydrogen. Hydrogen-powered trains can be refuelled quickly and efficiently, do not require electrified railway lines, but unlike their dirty diesel predecessors, the only exhaust is pure water vapour. This means trains will be able to travel on all railway networks, across countries and through small towns, with no CO2-emmissions at all.

The transition to hydrogen rail has already begun. Germany recently inaugurated the world’s first railway line to be entirely run on hydrogen in Bremervörde, Lower Saxony. These trains have a range of 1,000 kilometres or 621 miles, meaning they are able to run for an entire day on the network on a single tank of hydrogen.

The President of Lower Saxony, Stephan Weil, hinted at the prospects of these hydrogen-powered trains to go global, calling them a “model for the rest of the world” and “a milestone on the road to climate neutrality in the transport sector.” Italy, France, Britain, the Netherlands, Denmark, Norway, Canada and the Czech Republic all have plans for their own hydrogen-powered trains soon.

In order to make this transition happen, STEM education is essential. Teaching renewable energy with a STEAM approach will enable the next generation of hydrogen engineering leaders to emerge, allowing the world to transition to renewable energy even more quickly. 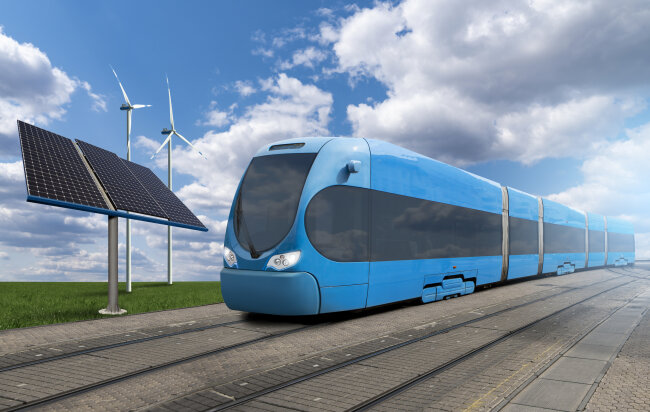